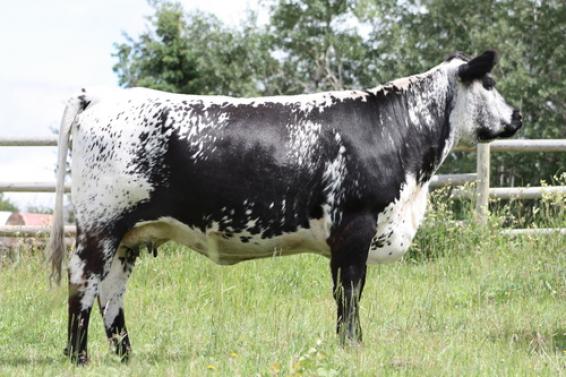 Speckle Park are Canadian!  Speckle Park had their beginning in the province of Saskatchewan, Canada – a first for Saskatchewan. Their development took place in Alberta and Saskatchewan along the Yellow Head Highway between North Battleford, Saskatchewan and Spruce Grove, Alberta.  Speckle Park were only the second breed of beef cattle in Canada to be granted distinct breed status.

What are they genetically?

Speckle Park are a combination of the genetics of three breeds from England and Scotland:

What’s in a name?

Speckle Park were named just that by Bill and Eileen Lamont.  Both parts of the name refer to the colour pattern.  “Speckle” was obvious because of the spots on the rear quarters and throughout; and “Park” because some of the Speckle Park display the white park colour pattern of a white body with coloured points about the ears, eyes, muzzle, lower legs and teats.

The singular Speckle Park is used as a collective noun for the plural, so that whether you have one or a hundred, you will have Speckle Park.

Who started them and where?

In 1959, when Eileen and Bill Lamont of Maidstone, Saskatchewan, bought their first speckled heifer from Mary Lindsay of Greenstreet, Saskatchewan. The Lamonts were breeders of Appaloosa horses and Angus cattle, and thought the cattle would go well with their herds.  The idea of developing a breed came later.  A monument at the side of the Yellowhead Highway at Maidstone, Saskatchewan pays tribute to the Lamonts for their role in starting Speckle Park.

Mary Lindsay had spotted a red roan heifer in her father’s herd a few years before and she bought the heifer. This heifer came to be a cow that always produced that colour pattern regardless of the sire. It is believed that the heifer was a descendent of a Teeswater Shorthorn and a bull which had the white park colour pattern.

The Lamonts crossed their speckled cows with black Angus bulls.  Lamonts also ranched in a district of Saskatchewan which at that time restricted ranchers from keeping any intact bulls other than purebreds.  Even though sired by Angus bulls, the resulting offspring came in a variety of color patterns, some white with black points, some leopard coloured and some black sided with speckled hips, white top and underline and roan faces. The Lamonts grew very interested in their Speckle Park and decided to attempt to develop a new breed.

How long has this all taken?

Interest in the cattle grew, not only with cattlemen but also the press. A trio of Speckle Park steers made the trip to the Royal Winter Fair in Toronto in 1972. They were featured in Case International Publications under a section on “Minority Breeds in Canada.” Around 1983 Lloyd Pickard, a cattle promoter and Angus breeder from Alberta, included a few pages about the Speckle Park in his book “100 Years of Angus in Canada.”

On July 6, 2006, the Canadian Speckle Park Association’s Articles of Incorporation were amended to the effect that Speckle Park became a distinct breed of purebred cattle according to the terms of the Canadian Animal Pedigree Act.  A few days later the carcass of another Speckle Park steer was awarded the championship at a major all-breed carcass competition in Calgary, Alberta.

Speckle Park are a middle of the road, medium sized, polled, good beef animal. Canadian Speckle Park is so named because of the colour pattern of the cattle. Speckled refers to the spots on the rear quarters and across the body, and park refers to the colour around the ears, eyes, muzzle, lower legs and teats. Except for the solid colour pattern, Canadian Speckle Park have white lines on their backs and underbellies. The classic speckle pattern contains more coloured spots around the hips and shoulders, with a generally black or black roan face. White with small black spots is characteristic of the leopard pattern. Classic speckle and leopard patterns are genetically the same, and result from the combination of the white park gene and the solid gene. The pattern of white with black points shows a mostly white animal with black around the ears, eyes, muzzle, lower legs and hooves. Solid coloured offspring also exist in Canadian Speckle Park herds.