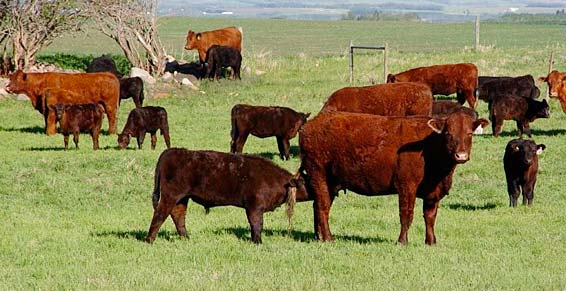 Davis Rairdan has Salers embryos for sale from some of the most prominent listings in the Herdbook. If you are thinking about buying Salers embryos, consider Davis-Rairdans many years experience in providing embryo transfers for sale. We've been in the embryo transplant business since 1980 and count among our clients some of the most prominent cattle breeders in Canada and abroad.

Salers are considered to be one of the oldest European breeds, whose roots can be traced to 7000-year-old cave drawings found near the town of Salers in the South Central region of France, the Auvergne, in the heart of the volcanic area of the Massif Central. The rough terrain, poor soil and harsh climate combined with the area’s isolation contributed to a genetically pure breed of cattle with bred-in range ability to thrive almost entirely on native grasses in the summer and roughage diet in winter.

The Salers breed in North America has evolved into an outstanding maternal beef breed. The cattle are usually solid red or black, and are naturally horned but polled bloodlines have been developed. Salers females possess a larger than average pelvic area and calve easily to the service of larger terminal cross sires. They are excellent mothers with good milk production, are very fertile and re-breed quickly.

Salers bulls are aggressive breeders and sire calves of moderate birth weight, with a strong will to live and good growth. Salers cross steers perform well in feedlots and have exceptional carcass yield and quality.

These traits have made Salers the choice of many commercial cattlemen striving to maximize production without increasing management or labour. Salers are a balanced breed, which is optimum in all aspects of beef production.

Salers were first imported into Canada in 1972 with the Salers Association of Canada being established in 1973. Canada continues to be an excellent source for Salers genetics worldwide.