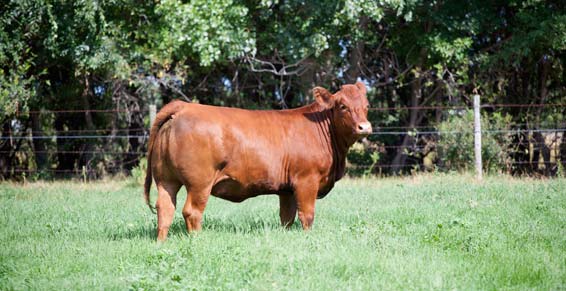 Davis Rairdan has Gelbvieh embryos for sale from some of the best Gelbvieh breeders in America. Gelbvieh are a continental breed and a beef-producing specialist.

Gelbvieh (pronounced Gelp-fee) cattle where developed in the Bavarian region of Germany in the early 19th century. Semen from Gelbvieh bulls was first imported in the US in 1971, and the American Gelbvieh Association (AGA) was organized that same year.

The AGA has maintained the strong performance heritage of the German Gelbvieh breeders with a policy of mandatory performance records. This has produced a database of well over one million performance records that result in an annual Sire Summary, Cow Recognition Program, EPDs for all registered Gelbvieh and a powerful source of documented information for cattlemen raising Gelbvieh on both the commercial and Purebred level.

Gelbvieh offers the same genetic benefits in a variety of phenotypic packages. Commercial producers can select from red Gelbvieh or black, and from either polled or horned Gelbvieh genetics. That's one more reason Gelbvieh fit so well as the crossbreeding component on British or Brahman-based cows.

Gelbvieh's "mother" traits of fertility, milking ability, moderate size and docile temperament have become more important than ever before, making Gelbvieh the obvious choice for crossbreeding programs. The percentage Gelbvieh female is rapidly becoming one of the most sought-after replacements in the industry.

Vigorous at birth, Gelbvieh calves wean off heavy and gain rapidly. As documented by progeny tests, impressive feed efficiency and lean/muscular carcasses round out the roster of breed characteristics that have made Gelbvieh quite popular with cow/calf operators, feeders, packers and consumers.

Gelbvieh genetics are a guaranteed marketing asset, backed not only by individual breeders but by the strength of the AGA. As a service to cattlemen using Gelbvieh bulls, the AGA established a Commercial Marketing Program (CMP). This program is designed to increase marketability of Gelbvieh feeder and finished cattle. AGA was the first breed association in the U.S. to establish a full-time staff position dedicated solely to the commercial side of the industry.